FREE EVENT, OPEN TO THE PUBLIC

Abdur-Rahman Muhammad, credited with the exoneration of the men accused of the Malcolm X assassination, shares his story with the VSU community.

Virginia State University is pleased to announce that one of the foremost experts on the life and legacy of Malcolm X will speak on campus as part of the Black History Month speakers series. 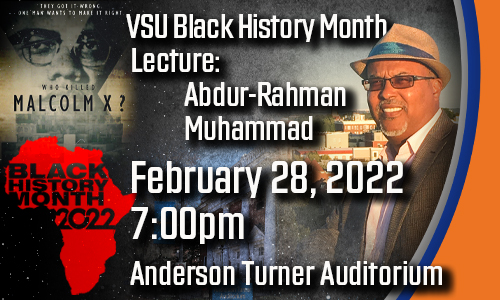 Mr. Abdur-Rahman Muhammad will join the Provost’s Lecture Series as the Executive/Speaker in Residence. Muhammad is an activist, investigative journalist, and was partly responsible for the reinvestigation of the Malcolm X assassination case and the eventual exoneration of two innocent men.

Muhammad will host a screening of the acclaimed documentary “Who Killed Malcolm X”.  In addition, he will lecture and participate in a question-and-answer session. The screening and lecture will be held on Monday, February 28, 2022 at 7:00pm. This event will be livestream.

“We are thrilled to bring Mr. Muhammad’s knowledge, expertise, and activism to Virginia State University,” said Dr. Donald E. Palm, Executive Vice President and Provost. “With his HBCU foundational roots, his extensive scholarly work, and his groundbreaking contributions to the legacy of Malcolm X, Mr. Muhammad will bring a wealth of knowledge and perspective to our Trojan community.”

Mr. Muhammad earned his bachelor’s degree in philosophy from Howard University and has devoted his life to creating and inspiring transformative change for African American people in their quest for justice and equality. Mr. Muhammad’s articles and essays have been published in a myriad of newspapers, magazines, scholarly journals, and his own popular blog entitled, A Singular Voice.

As the University endeavors to meet the educational and cultural needs of our students, Mr. Muhammad’s tenure in the Provost’s Lecture Series for Black History Month aligns with our mission, values, and overall commitment to academic excellence.