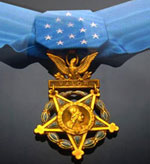 The Medal of Honor is awarded by the President, in the name of Congress, to a person who, while a member of the Army, distinguishes himself or herself conspicuously by gallantry and intrepidity at the risk of his or her life above and beyond the call of duty while engaged in action against an enemy of the United States; while engaged in military operations involving conflict with an opposing foreign force; or while serving with friendly foreign forces engaged in an armed conflict against an opposing armed force in which the United States is not a belligerent party.

The deed performed must have been one of personal bravery or self-sacrifice so conspicuous as to clearly distinguish the individual above his or her comrades and must have involved risk of life. Incontestable proof of the performance of the service will be exacted and each recommendation for the award of this decoration will be considered on the standard of extraordinary merit. 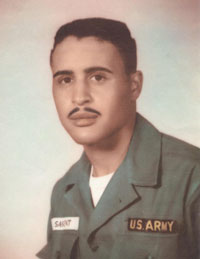 Citation: For conspicuous gallantry and intrepidity in action at the risk of his life above and beyond the call of duty. While leading a platoon of Company B, 1st Lt. Sargent was investigating a reported Viet Cong meeting house and weapons cache. A tunnel entrance which 1st Lt. Sargent observed was booby trapped. He tried to destroy the booby trap and blow the cover from the tunnel using hand grenades, but this attempt was not successful. He and his demolition man moved in to destroy the booby trap and cover which flushed a Viet Cong soldier from the tunnel, who was immediately killed by the nearby platoon sergeant. 1st Lt. Sargent, the platoon sergeant, and a forward observer moved toward the tunnel entrance. As they approached, another Viet Cong emerged and threw 2 hand grenades that landed in the midst of the group. 1st Lt. Sargent fired 3 shots at the enemy then turned and unhesitatingly threw himself over the 2 grenades. He was mortally wounded, and his 2 companions were lightly wounded when the grenades exploded. By his courageous and selfless act of exceptional heroism, he saved the lives of the platoon sergeant and forward observer and prevented the injury or death of several other nearby comrades. 1st Lt. Sargent's actions were in keeping with the highest traditions of the military services and reflect great credit upon himself and the U.S. Army.